The rise of China and India in Africa has important implications for the continentís development. While the two Asian giants provide a much needed alternative to the old and until now sole paradigm of dependence on the West, both countries are accused of being part of the global land grabbing club. Many African governments are complicit in this whole sale plunder of their land, which the FAO has compared to the ëwild westí. ÝIndiaís role in the land take-over underway in Africa raises serious questions about the direction of south-south relations.

Just before the 2010 World Cup of soccer in South Africa, the Indian food and beverages giantÝParle Agro ran an ad campaign to promote its new lemon drink LMN.ÝOne spot showed a couple of Bushmen digging in the sand for water when their stick breaks. Suddenly, they see a tap and wrench it off.

Fortunately, the Advertising Standards Council of India forced the company to make changes because the spot was racist and made fun of water scarcity, an acute problem in Africa and India.

The Parle ad is an apt metaphor for growing fears in Africa about Indiaís seemingly insatiable demand for the continentís land and water.ÝWater scarcity at home and global fears of a looming water and food crisis are among the reasons India has joined the club of land predators.

India now ranks third in the amount of land grabbed from other countries.ÝIt is, says environmental journalist Darrel De Monte, ìthe irony of a former British colony turning into a neo-coloniserî.

This is a story of irony upon irony ñ a country with more poor people than the whole of sub-Saharan Africa, a champion of south-south solidarity, and an aid-giver to Africa, participating in the frenzied heist of arable land in Africa ñ a continent which has seen more than its fair share of conflict and weather triggered famines being taken over to feed the world while its own people starve.

And the cherry on the icing ñ India itself has been the target of land-grabbing, both domestic and foreign, a case of the land-grabbed grabbing land!

India is a leading but by no means the only member of this inglorious club. It includes Indonesia, China, Europe, the USA, Saudi Arabia and other Gulf countries as well as mammoth investment banks such as Goldman Sachs and J.P.Morgan. Pension, private equity and hedge funds, and even development banks are all in on what has been dubbed the Great Land Robbery.Ý

Indian officials dismiss any criticism that its policies in Africa are a ìneo-colonial grab for its resourcesî and insist that Delhi is genuinely committed to Africaís development, ìunlike the ìloot and leave strategies of othersÖIndia seeks sustainable partnershipsî.

Recent history indicates otherwise ñ Anuradha Mittal, director of the Oakland Institute which has extensively documented the issue, puts it bluntly and succinctly: ìthe takeover of peoplesí land and water by corporations ñ even if they are from the global south ñ is a new form of colonisation.î (The Guardian, 25 Feb 2013)

Apart from the lust for quick returns, the Indian interest in African land is also triggered by a worrying drop in crop yields as a result of ìgreen revolution fatigueí, climate change, and the real challenge of feeding an extra few billion people in the coming decades .

Take Punjab for instance, once the wonder child of Indiaís Green Revolution and a textbook model for developing countries everywhere. Today, the state is reeling from a dangerously low water table, its soil contaminated by decades of chemical pesticides and fertilisers. Worse, around 18 cancer deaths are reported daily, a high price to pay for having sustained the countryís food security needs for so long.

Indiaís food security concerns exclude using much domestic land for biofuel production. At the same time, its energy requirements have risen exponentially.ÝAfrica, with 60 percent of the planetís arable land and compliant governments who make that land available at give away prices, is a dream come true for investors who put profits before people.

Perhaps the most controversial Indian company operating in Africa is BangaloreÝheadquartered Karuturi Global. Company CEO, Sai Ramakrishna Karuturi set out from Kenya, where he had made a fortune farming roses for European markets, and decided to replicate the rose formula in Ethiopia where millions of people already depend on food aid to survive.

Today, Karuturiís interests go way beyond flowers. His ambitious ìAfrican safariî has made him the quasi owner of more than 300,000 ha of fertile land in Ethiopia. The farmlands of the Democratic Republic of Congo (DRC), Sudan, Tanzania, Mozambique and Ghana, what he calls ìgreen goldî, are all in his sights.

The most documented Karuturi venture is in Gambela, one of the poorest regions of Ethiopia that borders the new state of South Sudan. The way Karuturi tells it, he had asked for ìonlyî 100,000 hectares but the Ethiopian government insisted he take 300,000 ha, twice the size of Delhi, for 99 years at US$ 1.5 per hectare! A disastrous maize harvest in 2011 sent Karuturi share prices plummeting. But this didnít dent his ambitions ñ he wants a million plus hectares in Africa to make his the worldís biggest farming company.

A recent Human Rights Watch (HRW) report found that seventy thousand people were forcibly displaced in a so-called ìvillagisation programmeî in Gambela to make room for Karuturiís operations.Ý The company plans to grow oil palm and sugar cane, as well as rice, maize, edible oils and cotton. Thousands of local Anuak farmers are being forced to become lowly-paid wage labourers on land that belonged to their ancestors.Ý HRW also accused the Ethiopian army of arbitrary arrest, rape and torture of scores of residents in Gambela to make way for large-scale commercial farming.

Karuturi contends that the land had not been cultivated for centuries. People are leaving, not because of forced displacement, he says, but because of urbanisation. As for any strictures from the Oakland Institute, he has never even heard of it and wonders whether this might not be a case of racism against non-European and non-American investors!

But there is little evidence for the companyís claims that it is contributing to Ethiopiaís development through capacity building and making food affordable, apart from its press releases. What is certain is that the massive clearing of land and forests will result in the ìloss and degradation of wetlands, decrease in wildlife populations and habitat, proliferation of invasive species and loss of biodiversity.îÝ

Karuturiís operations in Kenya have also come under criticism. Some 3000 workers on his flower farm near Lake Naivasha recently downed tools in protest at poor working conditions. Equally worrying is the environmental footprint left by the king of roses around Lake Naivasha, a wetland of international importance.

Another Indian player that has been moving in on Africa, also from southern India, is the Chennai headquartered Siva group, a tangled conglomerate conveniently registered in the fiscal paradise of Singapore. C. Sivasankaran made a fortune when the PC and telecoms market started taking off in India and is one of the richest Indians with a net worth of more than four billion dollars.

In 2010, he began acquiring shares in other Indian companies doing business in Africa and then quickly went on to becoming a major player himself. What the company website calls a ìforayî in the palm oil sector in Africa translates today into a 50 percent share in a 170,000 ha palm oil plantation in Liberia, shares in palm-oil and soybean production in the DRC, 200,000 ha in Cameroon and at least 100,000 ha in Sierra Leone as well as in Ivory Coast. Both Liberia and Sierra Leone are still struggling hard to feed themselves and rebuild after long brutal civil wars, while in the DRC, despite the UN presence and resolutions galore, bloody confrontations that have already claimed up to a six million lives, continue. Land is the resource that is most likely to spark conflict in any country where the majority of the population depends on farming for their livelihood, as is the case in most of Africa.

The Siva Group, and its complexÝtangle of subsidiaries and holding companies, now controls close to 700,000 ha of African land, nearly all of it for massive oil palm plantations.

But itís not just Indian companies with their fingers in the African land pie ñ the Delhi government too has acquired a million hectares of land in Ethiopia to grow jatropha, a much-hyped source for biofuel. Contrary to the hype, jatropha does require water and nutrients and therefore does present a threat to food crops and impossible to justify amid recurrent warnings of an imminent global hike in food prices.

A full-scale assault on the African commons is underway and Indian companies are part of it.Ý Most of these mega agribusiness projects, which require huge inputs of water and fertiliser, are located near major rivers that can be tapped to irrigate the giant industrial plantations. ÝThere are fears that if the current pattern continues, ìAfrica is headed for hydrological suicideî. It also means ceding decision making power on the question of what is grown, for what ends, and for whom.

During his last visit to Africa, Prime Minister Manmohan Singh was widely quoted as saying that, ìthe commerce between India and Africa will be of ideas and services, not manufactured goods against raw materials after the fashion of Western exploiters.î

Indiaís actual actions on the ground have rarely borne scrutiny in the mainstream press. Like the official version, the Indian media narrative of Africa (with few exceptions) is of a continent of unlimited resources, where, for people prepared to take risks, opportunity beckons.

Africa shining is just as potent a mirage as India shining ñ the shine is restricted to the economic and political elite on both sides of the Indian Ocean.ÝAfrican leaders ñ elected politicians and traditional chiefs ñ share the responsibility for allowing the pillage of their continent in the name of economic growth and development. 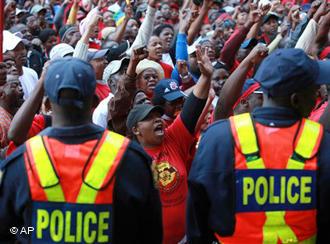 There is a complex and sometimes toxic combination of social, environmental, economic, and geopolitical factors at play in the new scramble for the continentís land and resources ñ but the stakes are deadlier this time.

When battle lines have been drawn over the control of land and natural resources in India, with protests and repression reported in more than a hundred districts, it is dismaying to see that Indian companies are replicating the same pattern in Africa.

Given their track record in their own country, it would be naive to expect Indian companies to show real commitment to the people affected by their investments in Africa. Voices are rising on the continent however, challenging the intentions of foreign investors. India would do well to take note or it might find that the welcome it is currently receiving could quickly fade.

(Sputnik Kilambi is an experienced radio journalist who now focuses on media development. She divides her time between her native India and Africa.)

Join us on social media