N. Jayaram is a journalist now based in Bangalore after more than 23 years in East Asia (mainly Hong Kong and Beijing) and 11 years in New Delhi, was with the Press Trust of India news agency for 15 years and Agence France-Presse for 11 years and is currently engaged in editing and translating for NGOs and academic institutions.

Garm Hava (Scorching Winds) is one of the best Indian films made yet and is likely to remain so into the foreseeable future. It takes a most sensitive, gentle and dignified look at the travails of a Muslim family which sought to stay on in post-Partition India when many others around them were leaving for Pakistan one by one.

The nearly 150-minute film directed by M.S. Sathyu is exquisitely well acted by the entire cast led by the late Balraj Sahni, one of the greatest actors and film personalities of India. He perfectly fills the role of Salim Mirza, a small time shoe manufacturer.

Gita Siddharth, A.K. Hangal, Shaukat Azmi and others with their subdued, understated performances lend credence to the tale, which despite some tragic turns, ends on a note that inspires hope and exhileration, hope that alas has been betrayed.

Garm Hava contains a deeply humanistic message. The leading characters in the film based on a story by Ismat Chughtai and adapted by Kaifi Azmi and Shama Zaidi, come across as most realistic and embody exemplary decency.

A Qawwali (Sufi devotional song) used in the film – Maula Salim Chishti – is one of the best of this genre of music, the words of Kaifi Azmi beautifully rendered by Aziz Ahmed Khan Warsi (https://www.youtube.com/watch?v=9F7Lzs2Df_Y)

I had seen Garm Hava a short while after it was released, in the mid-1970s. It remained etched in the memory as a breath of fresh air amidst the run-of-the mill Bombay film industry fare. There were, of course, many other realistic Indian films too on offer those days from great directors such as Satyajit Ray, Mrinal Sen and to a large extent Shyam Benegal.

Eventually Garm Hava receded from my mind. Although the 1980s were to prove to be a tragic decade in India, as indeed the two others to follow, it started reasonably peacefully. In the late 1970s India had seen off prime minister Indira Gandhi’s emergency, her party was trounced in general elections and democracy reaffirmed. But something had snapped: Cynicism had taken firm roots.

After her assassination on 31 October 1984 by two Sikh bodyguards following the assault on the Golden Temple in Amritsar, leaders of her party organised a pogrom in which more than 3,000 men, women and children died horrific deaths.

The destruction of the Babri Mosque on 6 December 1992 and the ensuing riots cost another 2,000 lives. The anti-Muslim pogrom in Gujarat of 2002 again led to more than 2,000 killings of men, women and children. The word “genocidal” has been used by several scholars in referring to the Gujarat event. Given the language that was heard from Hindu chauvinists then, it is entirely appropriate, despite the numbers actually killed. The intention was clearly genocidal.

The second time I saw the film was on India’s Republic Day last year, 26 January 2011, at Suchitra Film Society in Bangalore, during one of my last visits before moving back to India. My eyes were tearing up towards the end of the film, as indeed were those of many others in the audience.

I saw Garm Hava for the third time in early September 2012, the only grey-haired among about three dozen young people at a small venue in Bangalore and found myself more tearful this time, thinking of the anti-minority pogroms that have taken place since the film was first released. I was choking up and it took a long while to regain composure. (It seems I am not the only grown man to feel such emotion. Satyen K. Bordoloi has experienced it too: https://indikino.com/garm_hava.pdf)

So much that is depicted in the film ought to have been history but is part of current reality and if anything, discrimination against Muslims has only become heightened. If in the film’s late 1940s setting a house-hunting Muslim is frequently turned down, in the India of 2012, such rejection is so routine that ghettoisation is the trend of the times.

The Rajinder Sachar Committee constituted by the prime minister in 2005 to look into the economic, social and education condition of Muslims came out with a damning indictment of the neglect of the community (https://www.minorityaffairs.gov.in/sachar). 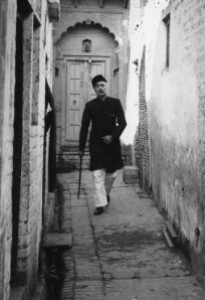 There was another reason for my anguish. I moved back to India in early 2012 after having been abroad for 23 years and was reading about the things happening around me in my city and nearby cities on the front pages of Indian newspapers, as opposed to reading about events in India on mostly the inside pages of international ones. Hindu fanatic outfits including the Sri Rama Sene had gone about attacking young men and women seen together in parts of Karnataka state a short while after I moved back. Incidents of violence against women were reported from several parts of India.

When Garm Hava was screened in early September at ITEC, which brings together young people working in the Internet Technology industry, their motivation was to try and make a change following an exodus from Bangalore of people from northeastern India. That had happened because of rumours that Muslims were attacking Northeast Indians. Mosques and lay members of the Muslim community held a series of Iftar parties and get-togethers to reassure those Northeasterners staying back that the two sides have no resentment of each other whatsoever and that they are both victims of rumour-mongering. ITEC members were among those who sought to assure the fleeing of their support.

In post-screening discussion, these young people spoke of their desire to make a difference and this somewhat diminished my discomfort and I was able to identify with a couplet in Urdu by Kaifi Azmi used in the film:

For those who watch the storm from afar

For them the storm rages equally whether here or there

If you join the mainstream you will merge with it

That is the call of the moment whether here or there.

Join us on social media